Home » Muscle Building » How Much Do Barbells Weigh? (10 Bars Compared) 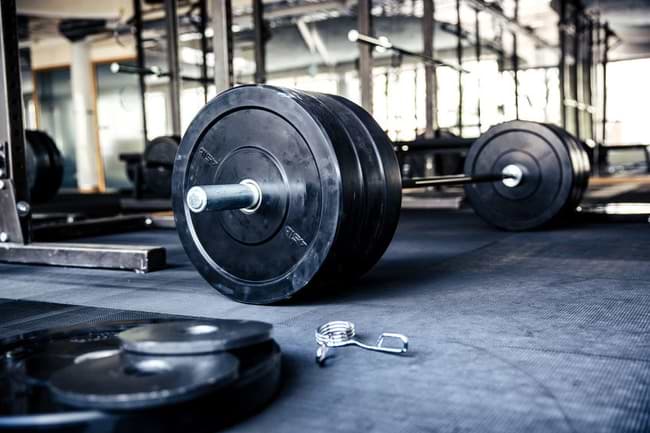 Your typical barbell found in most gyms is the Olympic barbell which weighs 44lbs or roughly 20kg. However, there are various other types of barbells other than just your straight barbell. We will compare them and how much those barbells weigh as well.

I can’t tell you how many countless times I’ve heard the question… ”how much do barbells weigh?” I have been on the receiving end of that question many times, but have also posed the question myself considering there are now so many different types of barbells.

You may catch me on occasion grabbing a barbell and running over to the weight scale to verify the weight of a particular barbell. After all, it is important to me that I know exactly how much weight I’m using. It baffles me that these companies still have not taken the extra effort to just stamp the total weight on these bars to make life easier on us.

Well, since that day will more than likely never come, I decided to do a little research and put together this short yet informative article to help everyone find the different weights of barbells by barbell type.

Back in the day when I first started weight training at the gym, when you went to load up a bar for the bench press you couldn’t just slap on a 45lb plate as you do now. Unless of course, you wanted to have the entire bar flip on you. And yes that has happened to me and was quite embarrassing, to say the least.

Luckily you won’t find those barbells in gyms anymore. Back then they were still using the lighter barbells. Now you will find that every gym uses the Olympic sized 44lb barbell. These are heavy enough to counterbalance any 45lb plate and thus no worries about bars flipping.

But with the times have come newer types and newer versions of bars. Each with its own unique function, size, shape…and yes, weight. And that’s where I come in.

So without further ado, here is my list of bars and how much each barbell weighs.

How Much Does Your Typical Barbell At The Gym Weigh?

Obviously the first bar everyone is interested in is the Olympic barbell found in your local gyms. These barbells are used for benching, squat exercises, shoulder press, and so on.

Olympic barbells weigh 44lbs and are typically 7 feet in length. These bars fit Olympic size plates, where the center hole is 2” in diameter and are strong enough to load up each side with several 45lb plates. The maximum weight load for these may vary, but on average the max load capacity is anywhere from 1000 to 1500lbs.

How Much Do Barbells Weigh by Length?

Even though the 7” barbell is the most common barbell found in the gym, there are still other lengths. You have for example the 6” barbell and the 5” barbell which are also popular for upper body resistance training and many CrossFit exercise routines.

The following is an illustration of the 3 most commonly used barbells and shows how much each barbell weighs by length.

I’ve been reading various sources that reference the standard barbell with the incorrect weight and size. I believe this is due to the term “standard” being used in a confusing way, which then becomes misleading and causes misinformation.

So I would like to at least clarify this before moving on.

You see, in most cases, the term “standard” is being used as a definition of being used or accepted as normal or average. When in fact the term standard, in this case, refers to the size of the barbell’s bar size.

That said, the standard barbell’s smaller sized loading sleeves also make this barbell lighter in weight than the Olympic barbells.

Here are your typical barbell weights:

More Weights Of Barbells You Will Find At The Gym

Now I could go on like this for each and every bar, but decided not to bore you too much with all this reading and going on and on. So I decided to make things easier for you and created a quick reference table for you. In this way, you can quickly and easily find the weight of any barbell you may be interested in.

Quick Reference Table Of How Much Barbells Weigh By Type

The following table will provide you with a quick comparison of various types of barbells and how much each barbell weighs, including some dimensions. Following this table, I will then give you a description of what some of these barbells are used for. Just in case you were wondering.

Who Still Uses Standard Barbells & Why?

Unless you’re using a gym from the ’80s that has never been upgraded to modern equipment standards, all commercial gyms will now only use barbells with Olympic sized loadable sleeves.

Every gym carries Olympic sized weight plates which usually range from 2.5lbs up to 45lbs plates. As mentioned before, these Olympic weight plates have a 2” in diameter center hole that will snuggly glide over the 2” Olympic sized loadable sleeve on the Olympic Barbell bar.

The standard barbell, on the other hand, will only fit 1” weight plates.

So what’s important to note here is that you can not fit a 1” plate on the Olympic barbell.

As I already mentioned, you will never find the standard plates in any of your modern gyms. Nonetheless, the standard barbells are still being sold as are the standard weight plates.

Why are these plates still being used, you might ask?

Well, these standard-sized weight plates have been sold for decades to fit the standard 1” sized dumbbell bars found in most homes across the country. And since weights are not exactly cheap, it would be more practical to buy a standard barbell which fits your already existing standard weight plates.

So the point I’m trying to make is, if you’re in the market for a new barbell and weights for your home gym, make sure you pay close attention to the barbell weight sleeve size.

Always make sure to match your weights with the barbell loadable sleeve.

With so many active female fitness enthusiasts and athletes, and the growing popularity of CrossFit it only makes sense that there be a barbell that is more functional for females.

Performing exercises such as the snatch, clean & jerk, bench press, squats, and deadlifts with a 45 lb barbell are not always ideal for female athletes.

However, using a 33 lb barbell for women can have many benefits such as added flexibility, more workout options, and increased control for better form and improved workouts.

Not all gyms have these barbells, however, if you are looking to add a barbell to your home gym setup, I would strongly suggest the 33lb barbell.

Knowing how much a barbell weighs may seem trivial to some, but for the avid bodybuilder, athlete, or CrossFit enthusiast, these numbers mean everything.

I hope this article was helpful and answered any questions you had about how much a certain barbell weighs and maybe even learned a little something extra along the way.

Good luck in all your fitness endeavors, and stay healthy.

With over 30 years of experience in strength training and fitness, Mark LaRue is the founder of Fitness Mastered, a blog to help educate fitness enthusiasts of all fitness levels, ages, and gender. We write topics that range from weight training tips and exercise routines to home workout machine and fitness related product reviews, to name a few.

FitnessMastered.com is a participant in the Amazon Services LLC Associates Program, an affiliate advertising program designed to provide a means for sites to earn advertising fees by advertising and linking to amazon.com, as well as other affiliates and affiliate networks. This does not add any additional cost to you but helps me provide you with great content like this.

Scroll back to top